America-First Precious Metals Companies – Don’t move wealth or retirement with companies that donate to Democrats or work with (for?) the Chinese Communist Party. Work with any of three companies CONFIRMED to actually love the USA:
✔️ Our Gold Guy – Small company for those seeking to work directly with the principle
✔️ Genesis Gold Group – Midsized company that unabashedly embraces a Christian worldview
✔️ Goldco – Large company endorsed by Chuck Norris

Senator Rand Paul was attacked yesterday. He received death threats and a “suspicious package” that is being investigated by the FBI. One would think the various search engines would make this a top story when people searched for “Rand Paul.” It’s big news. Bing and DuckDuckGo did. Google… not so much.

Article from The Liberty Daily.

Bing vs. DuckDuckGo vs. Google pic.twitter.com/cg3SahPdsJ

Eventually, Google did list news of the attacks on Senator Paul alongside the ideological attacks by people like Stephen Colbert, but not for at least three hours after Bing and DuckDuckGo were sharing the important news. After all, this is a United States Senator who was the victim of an alleged terrorist attack. Colbert’s opinion should be secondary to that, at least in a sane world. 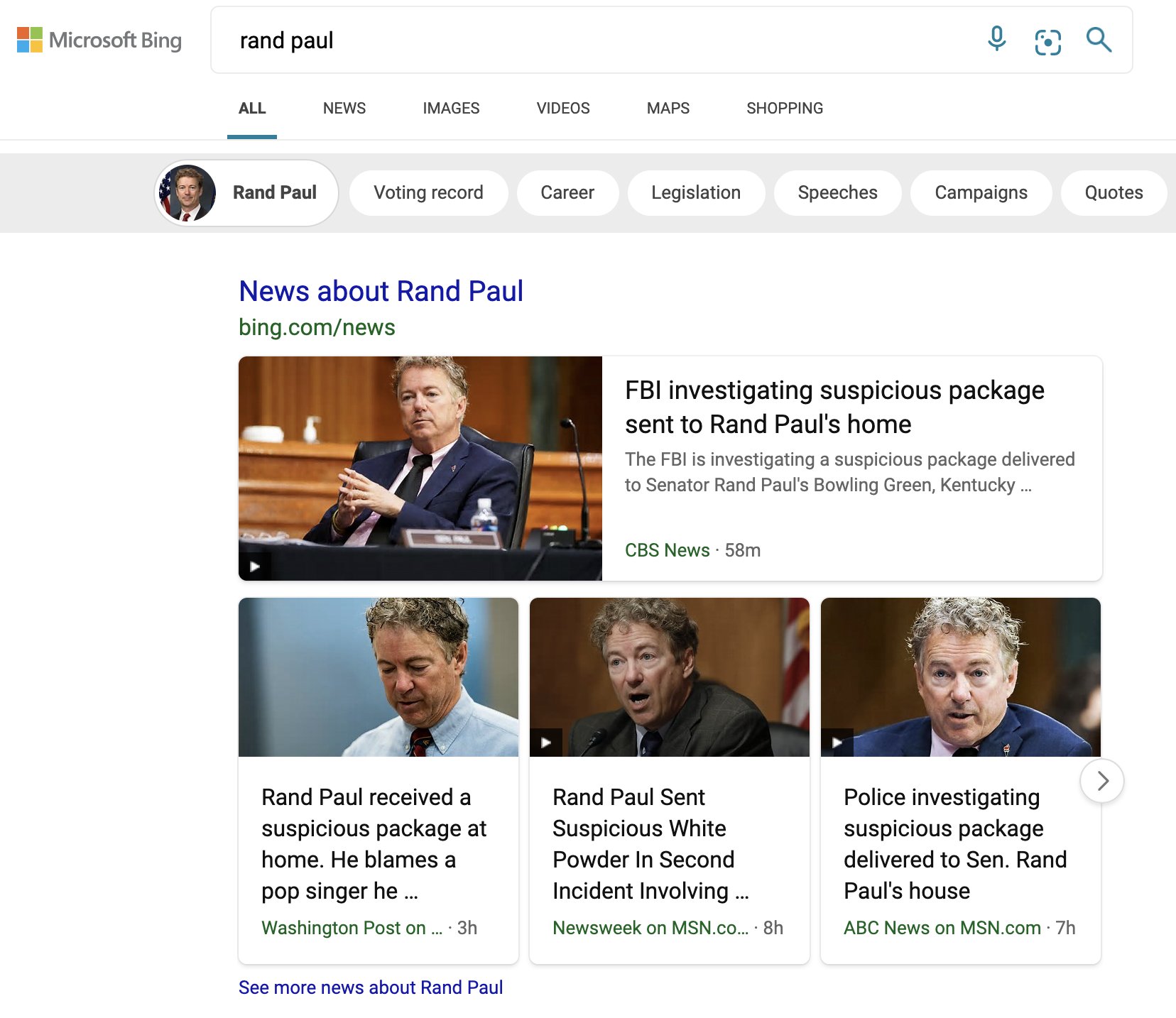 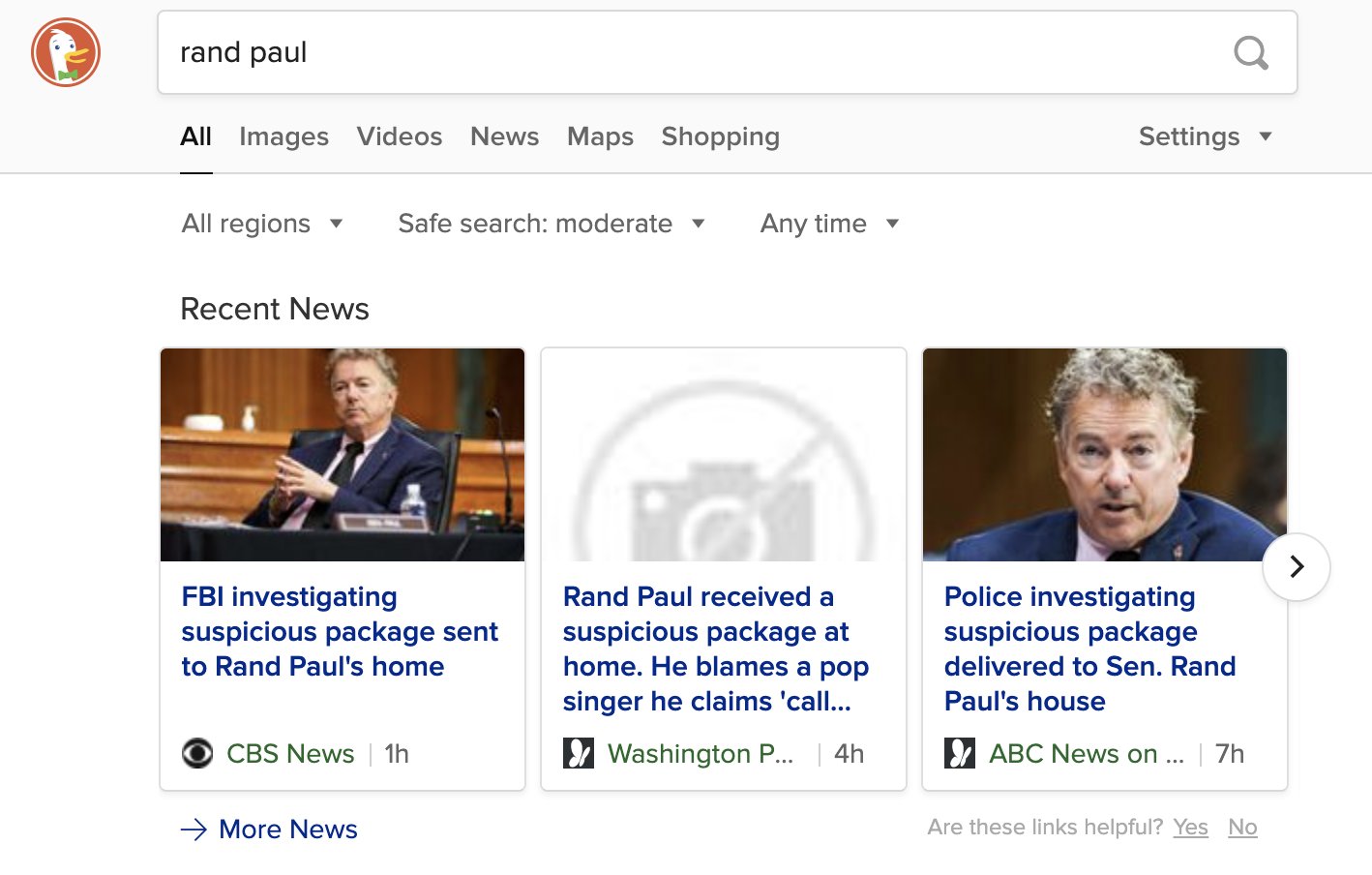 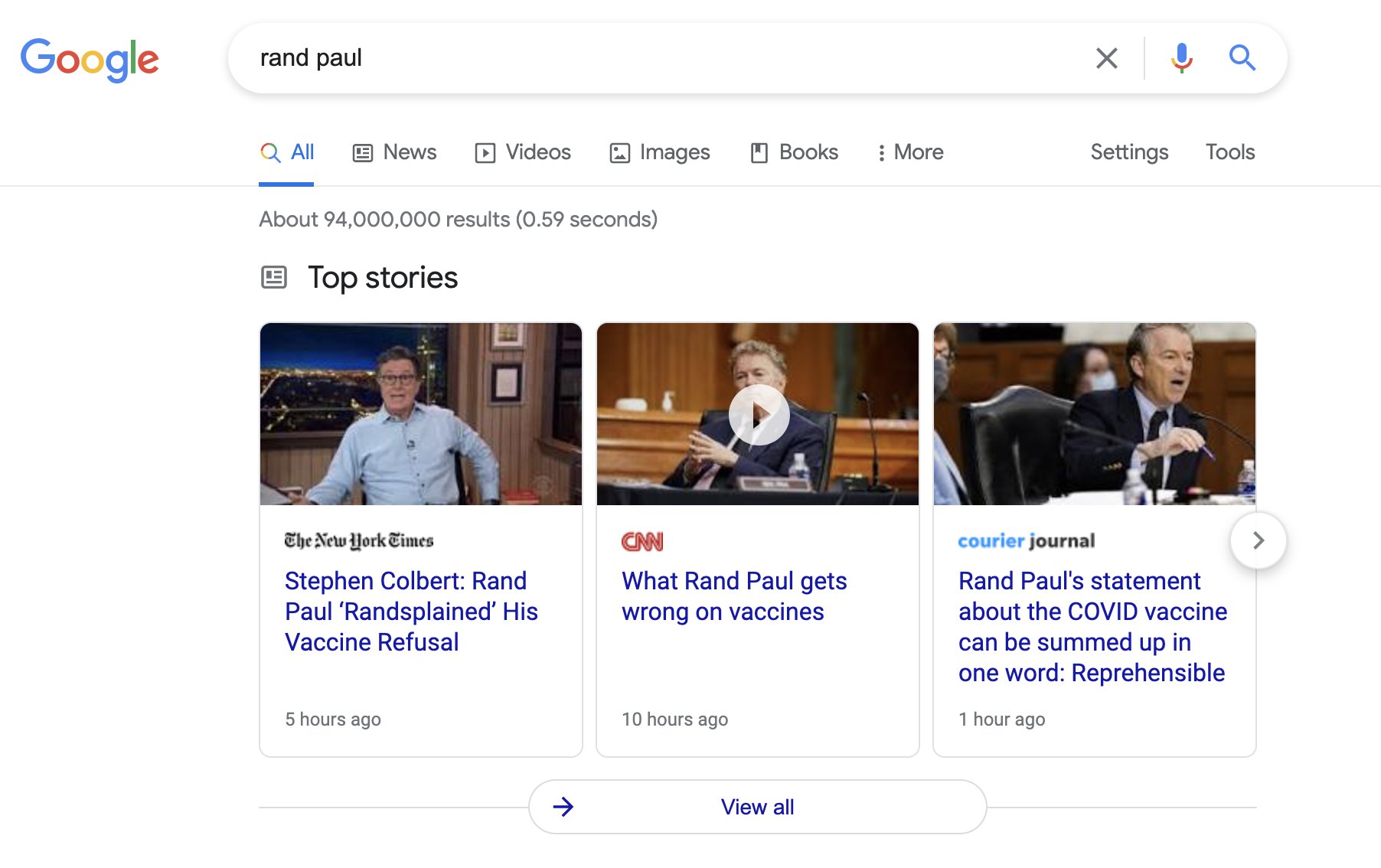 Let’s get one thing straight. Google’s search engine is the most “capable” when it comes to delivering the news. By “capable,” I mean it’s able to deliver the fastest and most relevant results if it is allowed to do so. Their technology is far superior to both Bing’s and DuckDuckGo, so anyone who thinks this was just a lag in reporting is wrong. They have programmed their algorithm to highlight the negative stories they displayed while suppressing anything that could draw positive thoughts or sympathy for conservatives like Rand Paul.

Google’s bias isn’t just the manual actions they take on their various properties, especially on YouTube and their search engines. They’ve trained the algorithms to detect topic and sentiment. It’s actually quite scary how accurately their algorithm — which has been developing for over a decade in its current iteration with tens, perhaps hundreds of millions of dollars put into it — can determine what a story or video is attempting to communicate. But hidden within this algorithm is the bias Google and most of its employees collectively share.

Ever since the 2016 election didn’t go as they predicted, Google and others in Big Tech made the conscious decision to push their narratives and agenda much harder. They always knew they had the power to make changes, but when their preferred presidential candidate lost in 2016, they swore to “do better” for 2020 and beyond. The have embraced the Democrats and their leftist agenda, which means they do what they can to suppress Republicans and conservatives.

The Rand Paul story was not manually suppressed as some have assumed. It was the victim of an algorithm that can’t always tell which positive or negative sentiment to suppress or amplify. Eventually, Google did put the terrorist attack stories on the list, likely based on social signals override the algorithmic bias.

Big Tech in general and Google in particular despise all conservatives and most Republicans. Their systems are designed to amplify progressive messages and suppress conservative ones.

‘The Purge’ by Big Tech targets conservatives, including us

Just when we thought the Covid-19 lockdowns were ending and our ability to stay afloat was improving, censorship reared its ugly head.

For the last few months, NOQ Report, Conservative Playbook, and the American Conservative Movement have appealed to our readers for assistance in staying afloat through Covid-19 lockdowns. The downturn in the economy has limited our ability to generate proper ad revenue just as our traffic was skyrocketing. We had our first sustained stretch of three months with over a million visitors in November, December, and January, but February saw a dip.

It wasn’t just the shortened month. We expected that. We also expected the continuation of dropping traffic from “woke” Big Tech companies like Google, Facebook, and Twitter, but it has actually been much worse than anticipated. Our Twitter account was banned. Both of our YouTube accounts were banned. Facebook “fact-checks” everything we post. Spotify canceled us. Medium canceled us. Apple canceled us. Why? Because we believe in the truth prevailing, and that means we will continue to discuss “taboo” topics.

The 2020 presidential election was stolen. You can’t say that on Big Tech platforms without risking cancellation, but we’d rather get cancelled for telling the truth rather than staying around to repeat mainstream media’s lies. They have been covering it up since before the election and they’ve convinced the vast majority of conservative news outlets that they will be harmed if they continue to discuss voter fraud. We refuse to back down. The truth is the truth.

The lies associated with Covid-19 are only slightly more prevalent than the suppression of valid scientific information that runs counter to the prescribed narrative. We should be allowed to ask questions about the vaccines, for example, as there is ample evidence for concern. One does not have to be an “anti-vaxxer” in order to want answers about vaccines that are still considered experimental and that have a track record in a short period of time of having side-effects, including death. One of our stories about the Johnson & Johnson “vaccine” causing blood clots was “fact-checked” and removed one day before the government hit the brakes on it. These questions and news items are not allowed on Big Tech which is just another reason we are getting canceled.

There are more topics that they refuse to allow. In turn, we refuse to stop discussing them. This is why we desperately need your help. The best way NOQ, CP, and ACM readers can help is to donate. Our Giving Fuel page makes it easy to donate one-time or monthly. Alternatively, you can donate through PayPal as well. We are pacing to be short by about $3700 per month in order to maintain operations.

Prepper Meds – Protect yourself now AND if the crap hits the fan with these amazing products for your home:
✔️ Boost your immune system with Nutraceutical by Dr. Zev Zelenko
✔️ Beat supply chain issues and future pharmaceutical tyranny with 5 Antibiotics Delivered to Your Home
✔️ Be ready to help yourself and your family with the World’s Best Med Kit

The second way to help is to become a partner. We’ve strongly considered seeking angel investors in the past but because we were paying the bills, it didn’t seem necessary. Now, we’re struggling to pay the bills. We had 5,657,724 sessions on our website from November, 2020, through February, 2021. Our intention is to elevate that to higher levels this year by focusing on a strategy that relies on free speech rather than being beholden to progressive Big Tech companies.

During that four-month stretch, Twitter and Facebook accounted for about 20% of our traffic. We are actively working on operating as if that traffic is zero, replacing it with platforms that operate more freely such as Gab, Parler, and others. While we were never as dependent on Big Tech as most conservative sites, we’d like to be completely free from them. That doesn’t mean we will block them, but we refuse to be beholden to companies that absolutely despise us simply because of our political ideology.

We’re heading in the right direction and we believe we’re ready talk to patriotic investors who want to not only “get in on the action” but more importantly who want to help America hear the truth. Interested investors should contact me directly with the contact button above.

As the world spirals towards radical progressivism, the need for truthful journalism has never been greater. But in these times, we need as many conservative media voices as possible. Please help keep NOQ Report going.

Yes, We Need Your Help

I hate being “that guy” who asks people to donate because I think our conservative news network is so crucial, but here I am…

When I left my cushy corporate job in 2017, I did so knowing that my family would have to make sacrifices. But I couldn’t continue to watch the nation slip into oblivion and was inspired by President Trump’s willingness to fight the good fight even at his own personal expense. What I didn’t realize then is that conservative media would be so heavily attacked, canceled, and defunded that the sacrifices would be extreme.

Many in this nation are struggling right now even though we weren’t struggling just a few years ago. I’m not alone. But I wake up every morning and operate the sites we’ve been able to build because there’s really no other choice. I refuse to be beholden to Big Tech like so many other conservative news outlets, which is why you won’t see Google ads here. With that said, it’s often challenging to pay the bills and it’s even harder to expand so we can get the America First message out to a wider audience.

The economic downturn has forced me to make a plea for help. Between cancel culture, lockdowns, and diminishing ad revenue, we need financial assistance in order to continue to spread the truth. We ask all who have the means, please donate through our Giving Fuel. Your generosity is what keeps these sites running and allows us to expand our reach so the truth can get to the masses. We’ve had great success in growing but we know we can do more with your assistance.

I would even be willing to entertain investments and partnerships at this stage. I’ve turned them down in the past because editorial purity is extremely important. I’ll turn them down again if anyone wants us to start supporting RINOs or avoid “taboo” topics like voter fraud, vaccines, or transgender supremacy. But I’d talk to fellow America First patriots who want to help any (or all) of our 10 news sites. Hit me up at jdrucker (at) substack (dot) com if you’re interested.

For those who have the means and just want to help keep the mission of spreading a conservative, Christian message to the nation, please consider a generous donation.

Covid variant BA.5 is spreading. It appears milder but much more contagious and evades natural immunity. Best to boost your immune system with new Z-Dtox and Z-Stack nutraceuticals from our dear friend, the late Dr. Vladimir Zelenko.